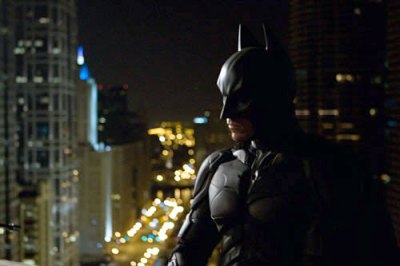 One of the things you accept about moving to a new city is going to see movies alone. I spent almost my whole weekend alone, actually, engaging in some solipsistic “me” time that included deep cleaning my apartment, putting away all the accumulated clutter from the unpacking process, channelling my inner Guitar Hero (both acoustic and Wii varieties), going in for some retail therapy, and seeing, finally, The Dark Knight.

I think Christopher Nolan is a very talented director. The film is absolutely novelistic in scope and sprawl, but maintains a narrow narrative thread. I think the characters are richly drawn in this film–more so than the last–and this makes for some compelling performances from Ledger, Eckhart, Gyllenhaal, and Oldman. Gary Oldman is a genius, taking this nothing role and turning it into the moral center of the film the way he does. In many ways, Commissioner Gordon is the fulcrum upon which all of Gotham City hinges.

The action of the film is so finely orchestrated it climaxes more times than the best date you’ve ever been on. It’s hard to sense when the film is going to end for this reason, but the climaxes aren’t as distracting as you might imagine. And the visuals do rival the most orgiastic of the Michael Bay films without the porny connotation. These are more Woo-like in their lyricism. (Soft-core?)

I could write an entire blog post about the voice of Heath Ledger as the Joker. It’s what makes his performance stand out, become unique, be so eerie but at the same time something knowable. The slight lilt of his Lower Midwestern accent colliding with the nasally, human delivery is chilling. He seems almost like a normal person pushed to abnormal extremes.

And that’s the true power of these new film versions. Superhero narratives are always representations of our culture in some way (Spider-man’s radioactive spiderbite evidence of nuke fears, etc). In this Batman, every character is a schism, has two halves–a public self, a shadow self. Batman is a shadow self. The Joker is a shadow self.