Oh, Vinyl – Where are thou gone?

I admit it–I’m a closet vinyl lover! Not the kinky kind–we’re not talking zip up suits and strange masks–I mean honest-to-goodness 33 1/3 vinyl record albums. I grew up in the 70s and my parents had the classic record player console complete with mini bar. I would spend my days playing Weebles while listening to a Sesame Street soundtrack album or this nursery song two-record album set complete with large Bugs Bunny-esque character and his band of merry children. In the evenings, my parents would alternate between Dad’s country tunes (“donuts make my brown eyes blue”) and Mom’s Spanish albums (“El Sauz y la palma se mesen con calma”). I remember when I knew all the words before I even knew what they meant. The order of the songs played on those scratchy albums mattered the world to levels of anticipation and memory games.

I bought a record player again, three years ago, before my son was born. Tried to find an appropriate place for it ’cause who knew record players could take up SO much room? We’ve gotten spoiled with CDs and MP3 players–heck, even a cassette player was NEVER this big. So it sat, under the console table, under the front room window. Until Saturday.

Vinyl albums have always taken me back to a special happy place. The mood was right. I set up the record player in the front room while my son played happily in a play tent with his Hot Wheels cars and Buzz Lightyear action figures. I dusted off the lid, wired up the speakers, cleared away cobwebs, and delicately took the cover off the record needle. Then I ran upstairs to where I knew half my collection sits in an old copy box relegated to the corner of the room under not one but two Boppy pillows and the box for my netbook. Like a kid on Christmas morning, I unearthed some favorites, focusing on “kid-friendly”: Motley Crue (not yet), Pat Benatar (soon), Tina Turner (SO NOT YET), The Muppet Movie Soundtrack (maybe), The Carpenters (do I want him to fall asleep yet?)–and then the motherload: my Monkees albums, all four of them (More of the Monkees, Pisces, Aquarius, Capricorn & Jones Ltd., The Monkees Greatest Hits and Then & Now The Best of the Monkees).

Rushing downstairs, careful not to drop the precious cargo, I couldn’t wait to fire up the albums that made me laugh, sing, and dance when I was younger AND older.

As I set the needle on the first record, my son quieted down in his play tent. Then he peeked his head out. Then he stepped out and proceeded to dance his way around the room. He jumped and shook tiny fists into the air. He chased me, I chased him–I held him in my arms while I danced around the room, spinning him now and then just to hear him giggle. “Mary, Mary” is still a great groove and I can’t help but click over to Run DMC’s version featuring Stephen Tyler of Aerosmith fame. “Your Auntie Grizelda” with its quirky nonsensical odd mouth sounds by Peter Tork, never fails to make me laugh and apparently, in recreating them as best I could, made my son laugh as well. “Star Collector” has now earned a new name (“The Hello Song”) and is over requested by the 2 year old. And on and on: we danced, jumped on the couch, kicked a ball around (yes, inside the house), and eventually settled down over the final strains of “Kicks.” A four album morning playdate–and it couldn’t have been better, if it tried. 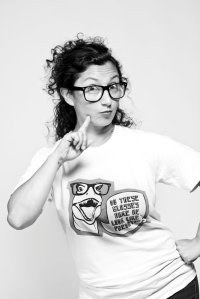 Ruby Classen (very-soon-to-be Harper) grew up in sunny Southern California with her inspiring, single mom and her younger brother. She now lives in Columbus, Ohio with her adorable and charismatic almost 3 year old son and their OLD little Pekingese dog. She anxiously awaits the arrival of her musician fiance from SoCal later this month. A dancer at heart, music has always moved her. She dances to the beat of his drum…happily ever after.