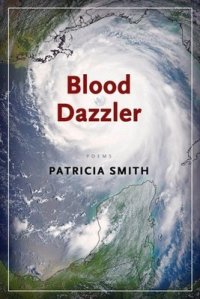 Helpless and horrified, the readers of Blood Dazzler can do nothing to stop the impending trauma and destruction of Hurricane Katrina as she sets her one clear eye on the city of New Orleans. We know the ending of the story, which makes the retelling so much more terrifying: hospital patients abandoned, a sports facility putrefies with rot and human misery, a President flies over to survey the flood, a lone dog fights to survive the storm, and everyone, people die or nearly die.

While the scope of Blood Dazzler is almost Biblical in theme, this tightly-constructed sequence of poems is a good primer for writing long-form poems (both long poems and narratives that elapse over several shorter pieces). Blood Dazzler is narrated in persona by first-person witnesses, be they pets, people, buildings, or the storm itself. Amid these threads, Smith–with both unflinching honesty and relentless regularity–knots a universal story of grief, misery, and anger that indicts those who did not act, and memorializes those who did.