Sorry everyone. I’ve been a bad guest blogger — my lack of posts belies only a crazy end-of-semesterness, and some terrible weather hasn’t helped.

But tonight, my friends Julie and Angie made the trek from where they teach in Barnesville, OH and we watched this faaaabulous movie: 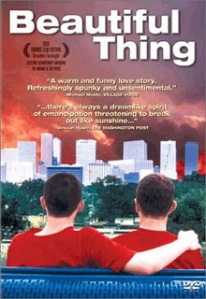 Beautiful Thing (1996) follows the story of two London boys, Jamie and Ste, as they fall in love and struggle to come out to themselves, their families, and their communities. It’s as much about the difficulties of class as it is about sexuality.

As touching and emotional as the movie is, it’s also rife with some of the wittiest lines in contemporary cinema. Like:

Leah: It’s your bird. She talks to me like I’ve got “cunt” written on me forehead.
Tony: You shouldn’t use words like “bird”.

Leah: Don’t suppose you’ve got any jobs in your new pub?
Sandra: No. But if I ever do turn it into a brothel I’ll get back to you, ok?

I guess I really adore the character of Leah, a high school dropout who tries to become Mama Cass. She lives with her mother in one apartment, adjacent to Jamie. And Jamie lives next door to Ste (short for Steven). When Steven’s dad and brother beat the living crap out of him, he starts sleeping over at Jamie’s.

And I think you can get the rest of the story from this film still, taken from the scene where Jamie massages peppermint foot lotion into Ste’s bruised and battered back.

There’s such tenderness and maturity between the two boys: they’re the only ones in the film who have a stable relationship, and the screenplay makes of them a kind of model for their community. It’s one of the most hilarious, empowering, moving films.

And its soundtrack is almost entirely culled from the songbooks of the Mamas and the Papas. I can’t think of another movie this well-done on our side of the pond…. Anyone else?